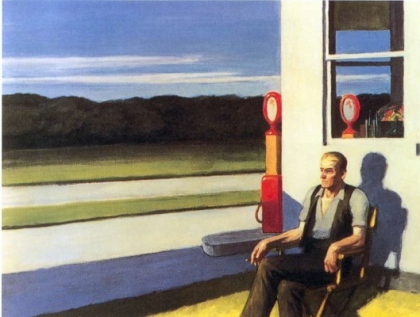 Like all writers, I have had fallow periods when the ideas and the desire to write jumped in a sports car and went on holiday. But I always knew they’d be back. I would use these fallow periods to read, think, and generally enjoy life as a non-writer for a change. When the ideas and urge to write returned, everything was refreshed and I worked with such passion, dedication, and energy that only overwhelming amounts of grading would be able to slow me down.

That’s how I envisioned this summer to be: A writing extravaganza. An uncharted season of few time-sensitive responsibilities and unlimited possibilities. By mid-May, classes had ended and my novel was well-launched, which meant my summer daily schedule could begin:

Only, no writing happened. I slept late, found other projects to do, and couldn’t get my writing engine going. Yes, some personal illness and family matters cropped up in late May/early June, but those never stopped me before. I searched for signs that I had entered an ill-timed fallow period, but this didn’t feel like a vacation. It felt like abandonment.

All through June, when I sat down to write, I was empty. I forced myself to write, and the result was terrible. I pressed on, knowing from experience that the first few writing sessions after a long lay-off typically produce less-than-stellar results, but after a few minutes, I would click onto the Internet and Facebook. I couldn’t even bring myself to post there. I simply scrolled through the stream of goings-on, occasionally reacting to someone else’s post, but bringing nothing to the table myself. The same thing happened when I turned my attention to promotion – I sloughed that off. I tried writing poetry: got one drafted and then zilch. I turned to blogging, and except for an interesting nugget about Stephen King (see the previous piece), that, too, fell victim to distraction and ennui.

My wife kept reassuring me that I was tired from a tough semester and the rigorous process of publishing a novel. Since she’s right 95% of the time, I relaxed, but as June turned into July and then into August nothing in my writing life changed. It was as if the authorial world had turned upside down. For most of my life, I was depressed when I didn’t write. Now, I was depressed when I sat down to write.

I have never experienced writer’s block for more than a day, so I have no idea how this ends. I imagine it will (I can’t – or won’t – imagine any other ending), but as I sit here watching the sun drift ever-so-slowly southward and charting how the bright, summer light is beginning its autumnal  flattening, I have to admit one thing:

If this were a novel, and my character was experiencing this sort of creative exile, I would have a feel for where this story was going, and I would know exactly what I had to do to keep it moving. Perhaps the writing gods are playing with me: They have turned me into a character stuck in some bloke’s novel and the bastard has an epic case of writer’s block. So here I sit, waiting for him to become re-inspired and pull me out of this holding pattern. It makes me wonder if every unfinished story in my “draft” file has characters feeling like I do now – on hold, uneasy, and waiting.

Okay, none of that’s very likely. What’s more plausible is recalling how a friend, a poet, once defined unstructured writing time: “A period, which, when it ends, you look back and discover that you haven’t written one damn worthwhile thing.”

Perhaps that’s what’s going on here. Maybe the imposed structure of the new semester will jar the world back into its normal orbit, and the creativity that I have lived with for most of my years will return. That’s my hope at the moment, and I’m sticking to it.